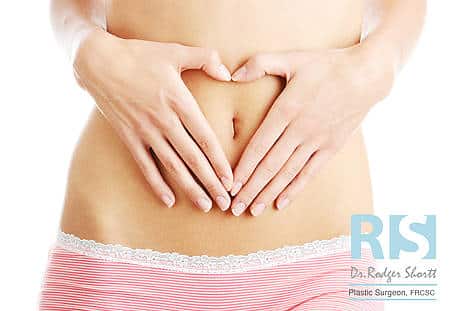 The most obvious sign that someone has had a tummy tuckis an unattractive belly button. The importance of a nice belly button is often overlooked. My goal in tummy tuck surgery is to allow someone to walk along a beach in a bikini without a stranger knowing they had surgery. This requires a low scar that hides under the bikini and a natural looking belly button with no visible scars. An ideal belly button is not too large or too small, has a natural flow into it from below, has slight hooding on the top portion and is oval in shape. It takes additional time in surgery to create this, but it is one of the most important considerations to me as a surgeon.

What can potentially happen to a belly button during and post-pregnancy?

Two things can happen to alter the appearance of the belly button during pregnancy. One is an umbilical hernia. The contents of the abdomen are pushed into the belly button making it protrude and look wider. Women often complain that it looks like their “innie became an outie”.

The other real change is to the tissue around the belly button. The umbilical base is fairly fixed. After pregnancy, the skin and fat which had been stretched for a long time then hangs over the belly button, giving it a widened and deepened appearance. In this case, the belly button hasn’t changed but its appearance still has.

Under what circumstances or time frame can a woman get the surgery?

It is never a good idea to have surgery for cosmetic reasons at the time of birth or right after. That is a time to focus on recovering and enjoying your baby. Also, the uterus, skin and fat are all undergoing changes for several months after. The uterus will shrink down and the skin will tighten up as this happens. Many women also experience a lot of weight loss during this time. It is always best to perform cosmetic procedures when your weight is stable for several months.

What other reasons are there for someone wanting to receive umbilicoplasty besides pregnancy?

Distortion from an umbilical hernia. Other causes of distortion or scarring such as piercings, laparoscopic surgery, or open surgery loss of a belly button following intra-abdominal surgery, requiring a complete belly button reconstruction, and finally, a cosmetic revision to make a tummy tuck look more natural.

How is an umbilicoplasty performed?

It really depends on the reason for the surgery. Hernia repairs are not considered a cosmetic procedure and are usually done by a general surgeon; typically under general anaesthesia. They make an incision next to the belly button and cut the base of the belly button where it connects to the muscle layer. They then push the contents back into the belly and repair it with sutures or a mesh. This usually makes the appearance look much nicer, but the main goal is to prevent that protruding tissue from losing blood supply. What is important for people to understand is that this procedure will alter the plastic surgeon’s abdominoplasty technique. For patients that have an umbilical hernia but also want a tummy tuck, they should consider having both done at the same time. If they have already had a repair, they should be certain to let their plastic surgeon know or there can be a risk of losing the belly button altogether.

For most other umbilical procedures, they can simply be done under local anaesthetic, with the plastic surgeon correcting things as needed. Some stitches will be used, which will be removed in about a week.

What are the risks and benefits of an umbilicoplasty?

Any time you operate there are risks of bleeding, infection, and poor wound healing. Specific to the belly button, there could be a recurrence of the problem (especially the hernia), a thickened scar, or a scar that contracts causing the belly button to become too small.

Hernia repairs improve cosmetic appearance, but also minimize the risk that the tissue which was protruding loses its blood supply, which would necessitate urgent surgery. For all other procedures, the main benefit is cosmetic enhancement.

What is the recovery time?

Aside from the hernia repair, this is minimal surgery with limited discomfort and virtually no downtime. Often sutures will be placed that need to be removed approximately one week following surgery.

What can the patient expect long term?

The results for cosmetic surgery of the belly button are typically permanent. If someone were to put on or lose a lot of weight, it could alter the appearance again.

As seen in the online publication Deep Body: deepbody.ca/umbilicoplasty/

Feel and look better than ever before.